A review of Transformers: Revenge of the Fallen 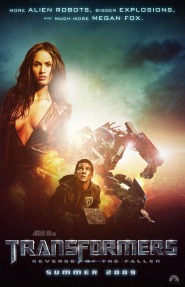 This Canada Day it was supposed to rain so my Wife and I decided to catch up on our cinema time.

I like the first Transformers, it was easy to watch and pretty entertaining. It was a typical summer blockbuster. The second one accomplished the same thing despite having a few pacing issues.

Short Version: If you enjoyed the first one and can turn your brain off while giant robots beat each other to death, than you’ll enjoy RoTF

Story
The story was bare bones simple. It was short bits of story interspaced with giant robots fighting and boob-shots. It brought back most of the interesting characters from the first and few new ones.

Although respect for continuity, physics, and realism were thrown out the window it was enjoyable.

Pacing
Pacing is its biggest problem. There’s a thirty minute scene of Labeouf and Fox running through the desert accomplishing nothing but a few extra boob-shots. Other then that it seemed to stretch out a little longer than it should have in places.

The best place for a Pee break would be when the couple splits from the two extra guys. If you have to Pee earlier then go after they kill the termanatrix.

Acting
I was expecting terrible acting through terrible script. However the actors did fairly well overall; Very few George Lucas moments of dialogue. I was especially impressed with Shia Labeouf he played amazing well with all the CGI and was very convincing in a role that could have been terrible.

Megan Fox was hot. I feel like I should stop there but I’ll be nice. They wrote her a terrible part, the whole reason for the character is to look good and save Labeouf’s ass once in the movie. I’m going to reserve my criticism on her acting till I see her in a movie where she’s cast as an actress and not a set piece.

Production Value
Holly WOW, the production value of this movie is probably higher then my annual salary for the next 20 years. That said there were a few bad cuts here and there and a little set recycling.

I’m convinced they used the Holy Grail resting place location from Indiana Jones. It was one of my highlights for this movie.

Overall
I won’t see it in theatres again and I wasn’t extremely impressed but it did accomplish what it set out to be and that was a semi-solid popcorn movie.

This entry was posted on Friday, July 3rd, 2009 at 3:10 pm and is filed under Movies, Reviews. You can follow any responses to this entry through the RSS 2.0 feed. You can leave a response, or trackback from your own site.

One Response to A review of Transformers: Revenge of the Fallen