Ottawa Comiccon – People you must go check out!

Today is the start of Ottawa Comic Con. If you are the kind of person who hates browsing the millions of booths, tables, etc., let me help you with a few recommendations.

S.M. is an author of fantasy novels and she’s a darn good one at that. Her books aren’t expensive considering their quality and they’re a lot of fun.

I highly recommend you go by (and buy) to say hello.

I like to describe the Brown Coats as the nexus of Ottawa geekdom. They are well connected and a lot of fun to talk with. Pick up some buttons or, if like me, you’re a fan of Firefly, let them know about your favourite episode.

Do you like Geeky T-shirts and jewelry? Of course you do! This combined store will have a little bit of everything you need. The clothing is of great quality and made by the seller, and the jewelry is the same.

Go check out what they have and good luck not buying something.

Both Jen and I will be walking around at the Con, if you see us, say hi! 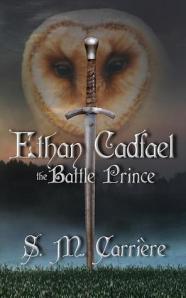 I’ve known S.M. Carrière for a little over a year now I should have read one of her books earlier.

Ethan Cadfael: The Battle Prince is an otherworld novel in line with Neverwhere by Neil Gaiman, The Fairy series by O.R. Melling, or Jack of Kinrowan by Charles De Lint.

It borrows heavily from Welsh and Irish mythology to make a well-rounded and fascinating world.

Below is my review. For more information on how and why I review books read my posts Part 1 and Part 2.

There were a lot of characters in this novel but it didn’t distract from the main characters’ story arcs. I really enjoyed watching Ethan’s development from listless jock to Battle Prince. It was so well done that until I thought about it I didn’t see it happening.

I also liked the unabashedly strong and intelligent women in this book. It’s not easy to write a female warrior without falling into stereotypes. S.M. did it extremely well.

There were a lot of characters and a few of the secondary ones felt like they had interesting stories to tell but never really got the chance to develop. O

There were two that bothered me the most. First was a character called Mitch, who was friends with Ethan. Their seemed to be more to the character and his odd submissiveness but his story ended with a handshake and a nod.

The other was a character called Joseph who was introduced around two thirds into the book. He was interesting and worked as an emotional foil for Ethan but felt like he didn’t need to be there.

The role that Joseph ended up playing in the end of the book was what I expected of Mitch after a step character arc.

The ease with which S.M. weaves mythology into her story is impressive and she manages to avoid info dumping by giving us tiny details throughout.

I particularly liked her use of vocabulary, in many otherworld novels or urban fantasies, the other keeps a very standard language akin to a hardboiled detective style. S.M. keeps the book’s voice in a tongue-in-cheek fantasy style that works perfectly with the story.

One of the strengths in this book is S.M.’s ability to write convincing dialogue. Each character has a unique voice that rings true and it makes it easier to follow which characters are which.

I was definitely taken back to a time I lived with three other guys during university.

On TV, in movies, and in books I find great pride when I understand the language that the main characters don’t. However, when the opposite happens and I don’t understand, I feel kinda dumb. This book has a healthy dose of Welsh and Irish throughout. At times the conversations are long. Never do they last more than half a page but it still frustrated me.

One the other side of the coin, the author did put a translation for all these scenes at the back of the book. If I had noticed I wouldn’t have minded. I think the translations might have been better as footnotes.

The story was a standard otherworld story but inversed. Instead of a regular everyday person falling into another world, a Queen fell into ours. I liked the inversion and I liked how well the character handled herself, it’s easy to think she’d panic and go nuts but she dealt pretty well.

Typically this story end after the character returns, or chooses not to return, to their own world, quite often with plot points dangling, and irritating me. The story reached that point and then proceeded to give us some extra action and extra story.

The story was well crafted and other than the Mitch thing, there were only a few things that frustrated me. I felt that it was a little too neat at the end. I felt like too many people got what they deserved and all was right with the world. It rang true but it also felt like the author didn’t want to wright a sequel and made sure she didn’t have to.

The book was entertaining throughout. S.M. really knows how to keep your interest. Even through the parts that should have been slow, it was still fascinating.

I also liked the extremely subtle inclusion of herself. A character talks a lot about her roommate and I’m fairly certain that roommate is the author.

This book was fun through and through. If I were to give it a fault it would be that it was a little too addictive.

Ethan Cadfael: The Battle Prince is the perfect otherworld novel, with enough twist and turns to keep an aficionado of the genre happy. I’d happily recommend this as a “gateway drug” to fantasy novels.

I highly recommend getting this book and devouring it. It’ll leave a smile on your face.

Nice and dramatic title. It refers to book launches. I’ve been to two this year. Sad naïve me from a year ago didn’t even know they existed. I though launch parties were for movies or businesses.

If you don’t know what a launch party is, it’s simply a way to celebrate the release of a book. The author and everyone involved have worked hard for years and want to celebrate before they get back to repeating the same hard work.

The good thing about a book launch is you get to meet the author, get the book signed by them, and hear them read from the book. The bad thing, it’s usually in a noisy bar and the rest of the world doesn’t realize you’re trying to listen to a reading. Totally worth it.

Have a refered to her in the blog before? Maybe. I’m too lazy to go look. Maybe I should give her a pet name or something. Wifey? The Wife? Jen? The Alpha Reader? Spouse? Hummm. Darn it. Now I’ve not spent so much time writing and thinking of the word Wife. That it looks wrong. Ok Wife it is.

My Wife and I have turned these events into date nights. Which is awesome. Hopefully she agrees.

The Launch party I went to was for The Summer Bird By S.M. Carrière.

It was at the Royal Oak on Laurier and if you’ve ever been to a British style pub in Ottawa you know what it looked like. White stone like walls that are made from something accented with dark brown wooden beams and decorated with bilingual world war two posters and one big screen tv.

Not what my tired mind expected for a fantasy book launch. Don’t get me wrong the book launch was awesome. We talked with great people, a wonderful meal, heard a fantastic reading, and bought a great book.

When I went to sleep that night I relived the book launch in a much more medieval fantasy way… My wife and I arrived at the Queen’s longhouse in advance of the given time. We waited on the comfortable chairs near the crackling fire. The stone room wasn’t large. It had two long tables and a small dais for the Queen’s throne.

We didn’t wait long. The Elven Queen S.M. and her Knight Protector J The Amazing Flatmate, arrived and greeted us. As they made sure that everything was prepared and ready for the festivities, several other guests arrived. There was the Minstrel T. of the Brown Coat and Sir B a Knight Champion, along with a dozen or so guests. As an aspiring monarch myself, it was nice to see the level of enthusiasm everyone had for the Queen and her work.

The evening passed quickly, the food and drink was abundant and the Queen never actually sat on her throne, choosing instead to sit with her guests. Spending time at each table.

When the meal was cleared, the Queen stood to thank everyone and to read of her work. (Since it was close to Halloween she read chapter 13.) She somehow found the perfect lighting to stand under (I’m not exaggerating S.M. found the most regal lighting possible.) As she read the hall became quiet. Everyone was captivated by her words. The only sounds that could be heard were her reading and the uncultured brutes in the other hall.

The hall burst into applause when she had finished. With the speech finished, my wife and I decided to head out. The Queen signed our book and thank us. We said goodbye to our new noble friends and headed home.

Probably from now on my mind will use this version as the truth. So if I ask where S.M. had such an awesome themed book launch just roll your eyes and leave me to my delusions.

We were at the bus stop before we realized that we hadn’t paid for dinner. I felt so horribly guilty that I ran all the way back. The waitress just shrugged and said it happened often. I still feel horrible about it. I might have to rethink my plans of becoming a master criminal.

If you want an ebook version of the Summer Bird, it’s available on all the major sites. If you want a hardcopy you’ll be able to buy one at Pop Expo in December. Get one it’s worth it. I’ve only had one chapter read to me and I whole heartedly encourage you to read it.

Until we meet again,